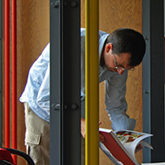 Diego López de Haro was born in late 1971 in Montevideo (Uruguay). He is an Architect (2000) graduated from the Faculty of Architecture of Montevideo. Between 1997 and 2000, he worked as an Associate Professor within the Workshop of projects coordinated by Professor Ruben Otero. Simultaneously, he worked in the studio of Architecture run by Martha Kohen and Ruben Otero as an associate designer (1998-2000).

In October 2000, he moved into Barcelona in order to join a Doctoral program at the Superior Technical School of Architecture of Barcelona (Architectural Projects –“The modern form”). In 2003, his thesis was approved (“The project as a disclosure in the work of Luis Garcia Pardo (1955-1963)”. Between 2001 and 2005, he performed as a collaborator at the Laboratory of Architecture, ETSAB, UPC led by architects Helio Piñon and Nicanor Garcia.

Diego has delivered lectures on the work of Luis Garcia Pardo in the PhD program – Architectural Projects (“The Modern Form”) – at the Superior Technical School of Architecture of Barcelona. At the same time, he has regularly taught Postgraduate courses at the University of Cuenca (Ecuador) within the Master’s program in Architectural Design.

Since 2005, he lives in Valencia where he founded Cabanes López de Haro Studio of Architecture alongside with Architect Amparo Cabanes – where he currently performs his professional activity.

In January 2008, Diego had his degree in architecture approved in Spain. Currently, he is an affiliated member of the Official College of Architects of the Valencian Community (COACV).