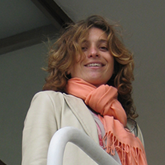 Between 2002 and 2004, she settled in Barcelona where she received her Masters of Interior Design from Polytechnic University of Catalonia. Simultaneously, she worked in several construction enterprises in the field of Project Management.

In 2005, she went back to Valencia where she founded Cabanes López de Haro Studio of Architecture alongside with Architect Diego López de Haro – where she currently performs her professional activity.

She is an affiliated member of the Official College of Architects of the Valencian Community (COACV) since January 2001.